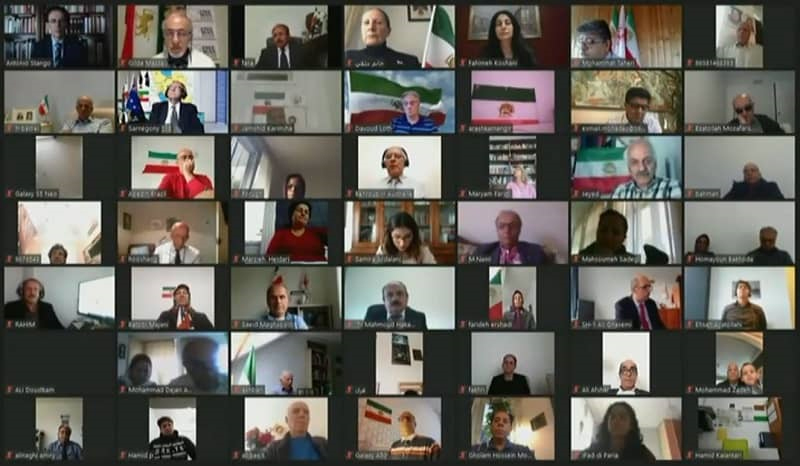 On Wednesday, 23 September, an virtual conference was held on the deteriorating human rights situation in Iran and the regime’s involvement in terrorism.

The event was attended by several Italian lawmakers and personalities, including former Italian Foreign Minister Giulio Terzi. Panelists condemned the Iranian regime’s human rights violations, particularly the recent execution of Navid Afkari, and the 1988 massacre of 30,000 political prisoners. They also highlighted that the international community’s inaction has emboldened the regime to continue its human rights violations and terrorism.

They further welcomed the activation of the ‘snapback’ mechanism and reimposition of all United Nations Security Council sanctions on the mullahs’ regime. They described firmness as the only way to stop the mullahs’ terrorism and human rights violations.

“The world must recognize the Iranian regime for what it is: an extremist, terrorist organization. Its behavior leaves no doubt that the international community must do more to force Tehran to end its malign behaviors. The regime continues its reign of terror across the region and beyond. The global arms embargo is an absolute necessity in stifling Tehran’s ability to arm its global terror proxies, to trade advanced weapons with Russia and China; and by that trade earning huge amounts of money to expand corruption and terrorism,” said former Italian Foreign Minister Giulio Terzi.

“The time has come to prioritize peace over profits and unify a politically smart ‘coalition of the willing’ behind the maximum pressure campaign. The time for deeply flawed deals is over. We must commit to an economic blockade of Iran. This is an international security “must”. The time has come to prioritize a very strong defense of human rights of the Iranian people. The time is now, in these very hours, at the 75th Session of the UN General Assembly,” said Mr. Terzi, urging the international community to take a firm action against human rights violations in Iran.

“The world is aware of the human rights situation in Iran and the world and Italy must act in this regard. The regime of Iran today is a very big problem for the Iranian people. Is something that is not leaving the country to be as great as it can be and is also a very dangerous regime for all people around the world. Because we know that with money of the Iranian people is not used to help Iranian people. With that money the Iranian regime helps many terrorist organizations all around the world, so we have to stop that, we have to help a democratic regime change in Iran,” said Italian Senator Roberto Rampi, who spoke next.

Ms. Elisabetta Zamparutti, former Italian lawmaker and treasurer of the “Hands Off Cain” international association, also addressed the conference. “There are thousands of political prisoners in Iran’s prisons, and they are torturing the prisoners against the international conventions. This is also a terrorist regime. We know that peace and security can be achieved in the Middle East only if there is a regime only if the regime in Iran change and become a democratic country.” she said.

Torture and execution inside Iran are one side of the regime’s coin, which has terrorism abroad as the other side. Closing the eyes on human rights violations inside Iran have eventually led to unbridled terrorism outside the country,” said the last speaker of the event, Mr. Antonio Stango, an international human rights expert and President of the Italian Federation for Human Rights.