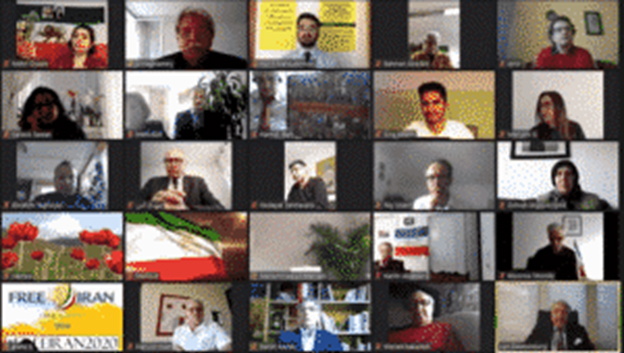 Iranian New Year Nowruz at U.S. Senate: A Bipartisan Call for a Firm Policy on Iran

On Thursday, 8 April, an online conference was held in Germany. The event featured remarks from a number of Iranian-German activists and both current and former members of the German Bundestag, most of whom offered recommendations for policy changes regarding Iran, both in Berlin and throughout the Western world.

That focus was reflected in the title of the event, “Reshaping Iran Policy.”

Mrs. Maryam Rajavi, the President-elect of the NCRI, send a video message to the conference. In her speech, she said that 40 years of Western dealings with this regime have proven that “any concessions make [the regime] even more ruthless.” She then concluded her remarks by emphasizing that in the midst of these protests and in the wake of the Vienna talks, Western policymakers will soon be forced to consider which side they are on: that of a dictatorship that recently attempted to commit terrorism in Europe or that of the people who are suffering under its rule.

In promoting the virtual meeting, the NCRI president noted that it could be expected to outline ways of centering human rights in future policy discussions, as well as halting the proliferation of Iranian terrorism and promoting a better future for the Iranian people. The speakers in the conference emphasized that this latter goal could best be accomplished through support for an organized, pro-democracy opposition movement.

Former Bundestag member Otto Bernhardt pointed out to conference viewers that he was part of a contingent of German politicians who have been supporting that movement since 2005 as part of the German Solidarity Committee for a Free Iran. Similar groups exist throughout Europe and North America.

Most speakers at Thursday’s conference pointed to events earlier in the week as evidence for the currently narrow focus of that policy. On Tuesday, representatives of the seven signatories to the 2015 Iran nuclear deal gathered in Vienna to discuss prospects for saving that agreement, which Iran began systematically violating.

Patzelt and his colleagues acknowledged the value of Western motives underlying the effort to revive the Joint Comprehensive Plan of Action and restore its restrictions on the Iranian nuclear program. But they also insisted that single-minded focus on those motives threatens to sideline other issues that are equally if not more important. Patzelt lamented that the meeting in Vienna entailed the representatives of secular democracies sitting “side-by-side with representatives of a murderous regime.” This, he suggested, would send the wrong message as long as European policymakers failed to “place human rights at the center” of their policy discussions.

This sentiment was echoed by Mr. Bernhardt, who explicitly stated that Iran should be granted no concessions whatsoever as part of any deal that, like the JCPOA, fails to mention human rights. The narrow scope of that agreement was a major source of backlash against it, with many politicians in the US and Europe.

Such arguments have arguably been strengthened during the period of Iran’s non-compliance, as the pace of violations has raised doubts about how seriously Iran was committed to compromise in the first place. Accordingly, Bundestag member Thomas Erndl used Thursday’s conference to argue that whatever the outcome of the Vienna talks may be, there must be consequences for Iran’s violations, as well as measures that bring an end to terrorist attacks and espionage activities in Europe.

However, the broader conference evoked very little confidence in the ability of Western negotiators to secure such an agreement through talks with the existing regime, especially under present circumstances. Aziz Fooladvand, an expert in extremism and an instructor at the Freiherr-vom-Stein school in Bonn, characterized that regime’s ideology as being one that is only capable of accepting peaceful coexistence in the form of “unconditional surrender.”