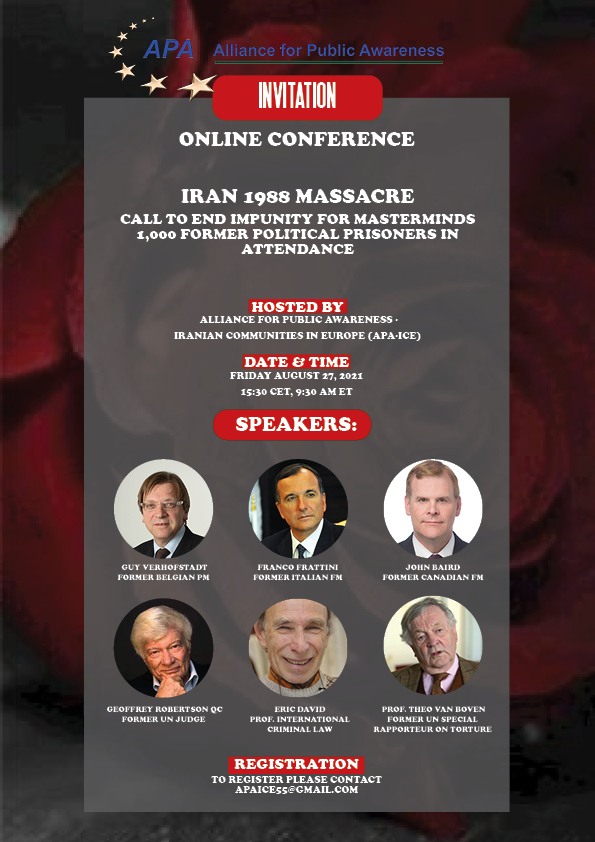 A number of distinguished human rights experts will join an online conference to call for an end to impunity for the Iranian regime’s leaders, in particular its president, Ebrahim Raisi, for their role in the 1988 massacre of 30,000 political prisoners in Iran.

Some 1,000 former political prisoners, some of whom are survivors of the 1988 massacre, will participate in the conference, and several will speak as witnesses.

The participants will also call on the United Nations and the international community to launch an independent commission of inquiry to uncover the details of this manifest case of crime against humanity, including the locations of the mass graves where the victims were buried and the role played by the regime’s leaders, including Ebrahim Raisi, the current president who was a member of the “death commission” in Tehran, which ordered the execution of prisoners in Evin and Gohardasht prisons. There has never been an independent UN inquiry into this crime against humanity.

Last May, more than 150 former United Nations officials and renowned international human rights and legal experts wrote to High Commissioner for Human Rights Michelle Bachelet, calling for a UN Commission of Inquiry into the 1988 massacre.

In a statement on June 19, 2021, Amnesty International reiterated that Raisi had a key role in the 1988 massacre and should be “investigated for his involvement in past and ongoing crimes under international law, including by states that exercise universal jurisdiction.”

On June 29, 2021, the UN Special Rapporteur on the Situation of Human Rights in Iran, Prof. Javaid Rehman, told Reuters in an interview that he supports an independent inquiry into the 1988 massacre and the role played by Ebrahim Raisi.