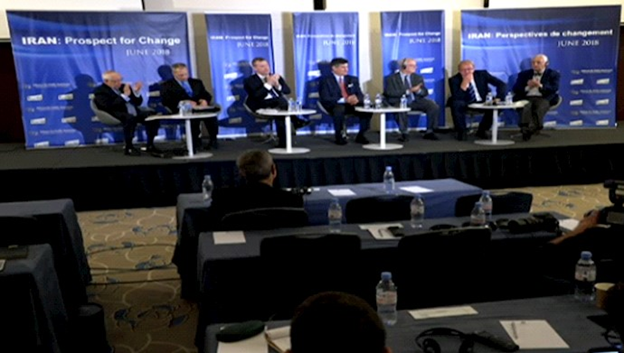 June 29, 2018 – A panel of experts from U.S., Canada, France and Algeria discussed the significance of recent protests in Iran and the importance the Iranian opposition and the Free Iran Gathering, scheduled for tomorrow (Saturday, June 30, 2018), play in the context.

Ambassador Mitchell Reiss, former Director of U.S. State Department Policy, who moderated the event, said, “Today Madame Rajavi is widely respected as the inspiration behind the democratic movement for change in Iran,” adding that the current momentum is on the side of those who want a democratic Iran. “Credit must go first and foremost to Madame Maryam Rajavi and the members of NCRI,” Reiss said, reminding of the role the Iranian opposition played in the protests.

“Many in America will rally to your cause if you present them,” Reiss said.

“There’s a material difference between what we saw before and what we see now. The protests are widespread and that is a hopeful sign,” said Michael Mukasey, former U.S. Attorney General.

The JCPOA gave Iran a lot of money and that money did not go into the economy, Mukasey said. “The slogans of the protests are focused on telling the regime that we’re not interested in seeing our money spent on Lebanon and Syria. We want it to be spent here.”

“We want to thank the men and women of Iran that have come to the forefront to fight for everything that the MEK has stood for,” said Louis Freeh, former Director of the FBI.

Freeh reminded the audience that the regime and IRGC continues to export terrorism in the region and that sanctions have not deterred the primary goal of exporting terrorism.

“However the command and control of the regime has started to deteriorate considerably,” he remarked. And testament to the fact is that the protests are becoming inclusive and are covering all of Iran.

“The resumption of sanctions is a key change and catalyst,” Freeh said, reminding that despite rhetoric we hear from different European states, companies will not take the risk of secondary U.S. sanctions for dealing with Iran.

“It’s time to push forward with confidence, consistence and with a vision,” Free concluded. “Part of that vision is getting Madame Rajavi to visit the United States.”

“I’m pleased to stand in solidarity with you and the people of Iran,” said John Baird, former Foreign Minister of Canada.

Baird praised the Iran for its phenomenal history and country and its great people and education. “The only thing holding the people of Iran back are the mullahs,” Baird said. “We must rally these people to come together and fight for a better future.”

“In a true democracy in ours, we have all the keys to understand the ideals PMOI and the NCRI, which we share,” Bonnet said, praising the PMOI/MEK for having stayed true to its ideals and course despite the many trials and tribulations in the recent decades.

Struan Stevenson, Coordinator for Change in Iran, former President of the European Parliament’s Delegation for Relations with Iraq.

“The political situation in Iran is like a volcano,” Struan Stevenson, Coordinator for Change in Iran, former President of the European Parliament’s Delegation for Relations with Iraq asserted.

Stevenson remarked that the significance of recent protests in Iran is that it was a massive uprising not only in Tehran but in 142 cities. “These are young people who are prepared to risk the ultimate price and go to protests,” he said. “There’s going to be a volcanic eruption that will sweep away this evil regime.”

“The people who are taking to the streets have had enough,” he said. “They look at the way the mullahs have stolen their money and are using the wealth of Iran to finance Bashar al-Assad and the brutal Shiite militias in Iraq, to finance Houthis in Lebanon, Hezbollah in Lebanon. They’re saying forget about Syria. think about us.”

Stevenson also emphasized that there are no moderates in the Iranian regime and protesters are saying that in their protests. “Rouhani is not a moderate or else he wouldn’t be president,” he said. “He’s an evil monster like the other mullahs.”

Stevenson also said that last week’s protests in Tehran’s bazaar are significant because the merchants of the Grand Bazaar were considered the traditional backbone of the regime. “But now they’re protesting to the collapsing economy,” he said.

“The interesting thing that has emerged from all this: The leaders are now pointing the finger of blame at the MEK,” Stevenson said. “They used to say the MEK is a grouplet, that they’re insignificant. Now they’re saying that they’re behind the uprisings. They fear the MEK.”

Stevenson concluded by saying that Mrs. Rajavi must be invited to the United Kingdom. “We the people of Europe expect more from our leaders,” he said.

Ghozali spoke to the importance, the history and the role of the MEK, especially as protests erupt across Iran, reminding their history and the sacrifices they’ve made to promote democracy and freedom in their country.

“Tomorrow there’ll be a democratic movement that will be able to manage the economy of the country,” he said, underlining that the Iranian opposition is the only viable alternative to the current regime.