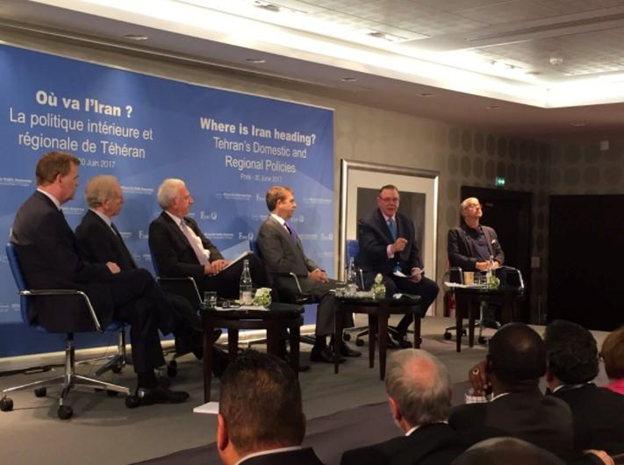 “A comprehensive Iran policy requires that we address all of the threats posed by Iran, and it is clear there are many,” Tillerson said April 19. “Whether it be assassination attempts, support of weapons of mass destruction, deploying destabilizing militias, Iran spends its treasure and time disrupting peace.”

The failed strategy, based on this notion: “diplomacy with Iran: Low Costs, Potentially High Rewards.” With the illusion of finding “moderates in Iran”.

“U.S. policy toward Iran is focused on changing the behavior of the Iranian regime, rather than changing the regime itself” Secretary of State Condoleezza announced on May 31, 2006, in a press conference held in the ornate Benjamin Franklin Room at the State Department.

The legacy of 15 years strategy yielded results in failure of War on Terror, Iran state sponsor of terrorism expanded, deploying destabilizing militias in Iraq, Yemen, Syria, and Lebanon with millions of refugees and 500000 civilian killed, continuing development and proliferation of missile technology is in defiance of UN Security Council Resolution 2231

The lessons from the War on Terror during the past 15 years indicate that it is time for the United States to take a different approach.

On February 6, 2017, Both Republican and Democratic lawmakers have condemned Iran’s January 29 ballistic missile test. Many also criticized Tehran for destabilizing the region through its sponsorship for terrorist organizations and militias.

On May 2017 Arab-Islamic-American Summit leaders in The Riyadh Declaration condemned the Iranian regime’s hostile positions and continuing interference in the domestic affairs of other countries in a flagrant violation of the principles of international law and good neighborhood, confirming their commitment to confront that.

On June 14, Secretary of State Rex Tillerson implied that the United States supports regime change in Iran, which would be a significant departure from U.S. policy under previous administrations. 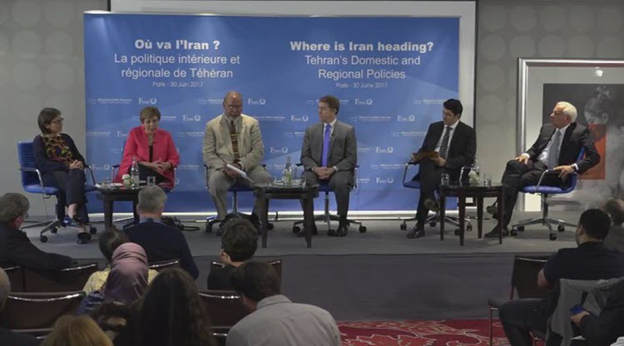 On June 30, 2017, several prominent figures gave their opinions on the current situation in the country, during a panel discussion regarding the US policy review on Iran.

Ambassador Lincoln Bloomfield, former Assistant Secretary of State for Military Affairs, moderated the discussion and was joined by John Baird, former Foreign Minister of Canada, Joseph Lieberman, former US Senator and Vice-Presidential candidate, Ambassador Robert Joseph, United States Special Envoy for Nuclear Nonproliferation and the Under Secretary of State for Arms Control and International Security until 2007, Rtd. General Jack Keane, former Vice Chief of Staff of the US Army, and Bruno Tertrais, Deputy Director of the Fondation pour la Recherche Stratégique of France.

John Baird kicked off the discussion saying that he completely rejects the Obama administration’s appeasement of Iran and his claims that President Rouhani is a moderate. He said that there is no moderation in the Iranian government and it was very naïve of Obama to make such claims. He also pointed to the recent presidential elections in Iran which were anything but democratic. He questioned how an election can be considered democratic when a panel exists to approve and reject candidates. There is nothing democratic about an election in which presidential candidates are only candidates because of their strong allegiance to the Supreme Leader and his vision.

Joseph Lieberman emphasized that nothing has changed in the Islamic Republic of Iran since the nuclear deal came into effect. He said that Iran continues to support terrorism, it continues to fuel warfare and still causes horrible human suffering in the Middle East, all to further its own agenda.

He too criticized the Obama’s administration’s treatment of Iran saying his policies were “Iran-centered”. Lieberman said that the Trump administration’s review of foreign policy toward Iran, which is currently in progress, will hopefully take into account that the people of Iran can be considered allies of the US and so can the Iranian Resistance. He said that the opposition and resistance to the regime are looking for the same as the US – peace.

Pointing to changes in Iran, Lieberman also mentioned that President Hassan Rouhani is starting to make independent comments that are angering officials of the regime, and the country’s Supreme Leader has publicly threatened that he will be sent into exile like previous presidents.

Robert Joseph agreed that nothing has changed in Iran since the nuclear deal was signed and emphasized that Iran continues to pursue nuclear weapons and ballistic missiles. He also pointed out that the National Council of Resistance of Iran (NCRI), the main opposition, very recently revealed new information about Iran’s ballistic missile program.

He called on officials to put the Iran proliferation threat into context, in other words, to recognize that the threat lies with the regime. He said it is essential to find a path to getting rid of the regime. They reiterated that this is the bottom line as far as he is concerned.

Joseph said that the nuclear deal is highly ineffective because it rewards the regime for pretending it is not pursuing nuclear weapons. He said: “Cheating is in the DNA of the regime.”

Regarding claims that there is moderation in the Iranian government, as said by many leaders in the West, Joseph said that it is a misplaced hope. He said that this will never happen and the Iranian regime is at the center of the threat. There must be regime change from within and this can be done via the opposition. He said that we need to support the opposition that wants a non-nuclear Iran that is ruled by a secular government.

Jack Keane said that the Iranian regime’s goal is to dominate the region and to impose its will across the Middle East, but the Trump administration is acting to put an end to this. Although he agreed that President Trump does not have much experience with foreign policy, he said that he has chosen a very strong, knowledgeable and experienced foreign policy team.

Speaking about the differences between the Trump administration and that of his predecessor, Keane drew attention to the fact that Trump, at the very beginning of his time in office, sent his top officials around the world to reassure them that the US would be by their side and that it would not be taking a “wait and see” approach to Obama’s administration.

Keane placed a lot of importance on Trump’s first official visit saying that it was very significant that it was to the Middle East. He made it clear that the US would stand with its Middle Eastern allies, saying that the biggest threat to all of them was Iran. He vowed that they would curb the threat of Iran together – showing that his administration was taking a 100 percent reversal of Obama’s policy.

Secondly, during his Middle Eastern trip, Trump told the Muslim leaders that they need to get extremism out of their mosques and they have to stop their citizens from funding terrorism. He said that they need to ensure that young people have an alternative but emphasized that the US would be standing behind them the whole way and is ready to use force, if or when it is necessary. Keane said that this visit was proof of Trump’s commitment to countering the Iranian threat.

Another action that showed Trump’s commitment was the fact that he acted immediately when Iran fired a ballistic missile in the early days of his time in office.

Bruno Tertrais spoke about the European attitude to the Iranian crisis, saying that many in Europe confuse moderation and pragmatism. Referring to claims that the regime is moderate, Tertrais slammed this idea saying that it may be pragmatic but it can in no way be described as moderate. He called Iran the “arsonist to the fireman” and said that it is hugely responsible for the rise in terrorism that we have seen in recent years.

Being French, Tertrais felt he had to mention France’s stance on the situation. However, French President Emmanuel Macron is so new to the office and has not said anything yet to indicate that he is naïve about the Middle East crisis. He strongly believes that Macron will have the correct policies in place to act in the way he should.

President Obama and many EU leaders thought that trade would bring moderation to Iran, but this is completely false. Furthermore, it has been historically proven that it doesn’t work. So rapprochement in that respect is a mistake.

Tertrais emphasized that Iran and its militias are propping up the Assad regime. ISIS is the “best friend” of Assad, therefore Iran, by supporting Syria, is reinforcing ISIS and its terrorist activities. And finally, he said that Iran is not showing the behavior of a country that is giving up for good the nuclear option.

The views and opinions expressed in this article are those of the author and do not represent any institution or entity.

Hassan mahmoudi: MSc California State University, Sacramento: A human rights advocate, admin member of the international human right organization, Up to date on all current affairs including political and economic issues on Iran and the Middle East.