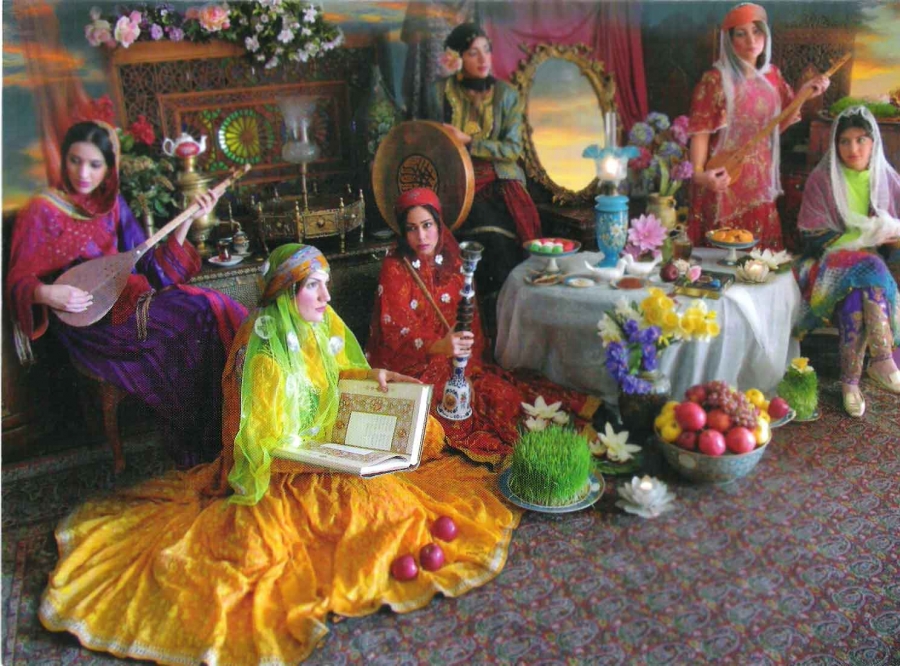 Nowruz, meaning “The New Day” is the name of the Iranian New Year in the Solar calendar. It marks the first day of spring or Equinox. It is celebrated on the day of the astronomical Northward equinox, which usually occurs on March 21 or the previous/following day depending on where it is observed. The moment the sun crosses the celestial equator and equalizes night and day is calculated exactly every year and families gather together to observe the rituals. Nowruz is celebrated by people from diverse ethnic communities and religious backgrounds for thousands of years.

It is a secular holiday that is enjoyed by people of several different faiths. It originated in Persia in one of the capitals of the Achaemenid empire in Iran and is also celebrated by the cultural region that came under Iranian influence or had migrations by Persians including Azerbaijan, Kurdish inhabited regions of eastern Turkey and Northern Iraq, Afghanistan, Tajikistan, Turkmenistan, Uzbekistan, Kyrgyzstan, Kazakhstan and other scattered populations in Central Asia.

Nowruz is partly rooted in the religious tradition of Zoroastrianism. Among other ideas, Zoroastrianism is the first monotheistic religion that emphasizes broad concepts such as the corresponding work of good and evil in the world, and the connection of humans to nature. Zoroastrian practices were dominant for much of the history of ancient Persia (centered in what is now Iran). Nowruz is believed to have been invented by Zoroaster himself, although there is no clear date of origin. Since the Achaemenid era the official year has begun with the New Day when the Sun leaves the zodiac of Pisces and enters the zodiacal sign of Aries, signifying the Spring Equinox.

The term Nowruz in writing first appeared in historical Persian records in the 2nd century AD, but it was also an important day during the time of the Achaemenids (c. 550–330 BCE), where kings from different nations under the Persian Empire used to bring gifts to the Emperor, also called King of Kings (Shahanshah), of Persia on Nowruz. The significance of Nowruz in the Achaemenid Empire was such that the great Persian king Cambyses II’s appointment as the king of Babylon was legitimized only after his participation in the New Year festival (Nowruz).

The UN’s General Assembly in 2010 recognized the International Day of Nowruz, describing it as a spring festival of Persian origin which has been celebrated for over 3,000 years.