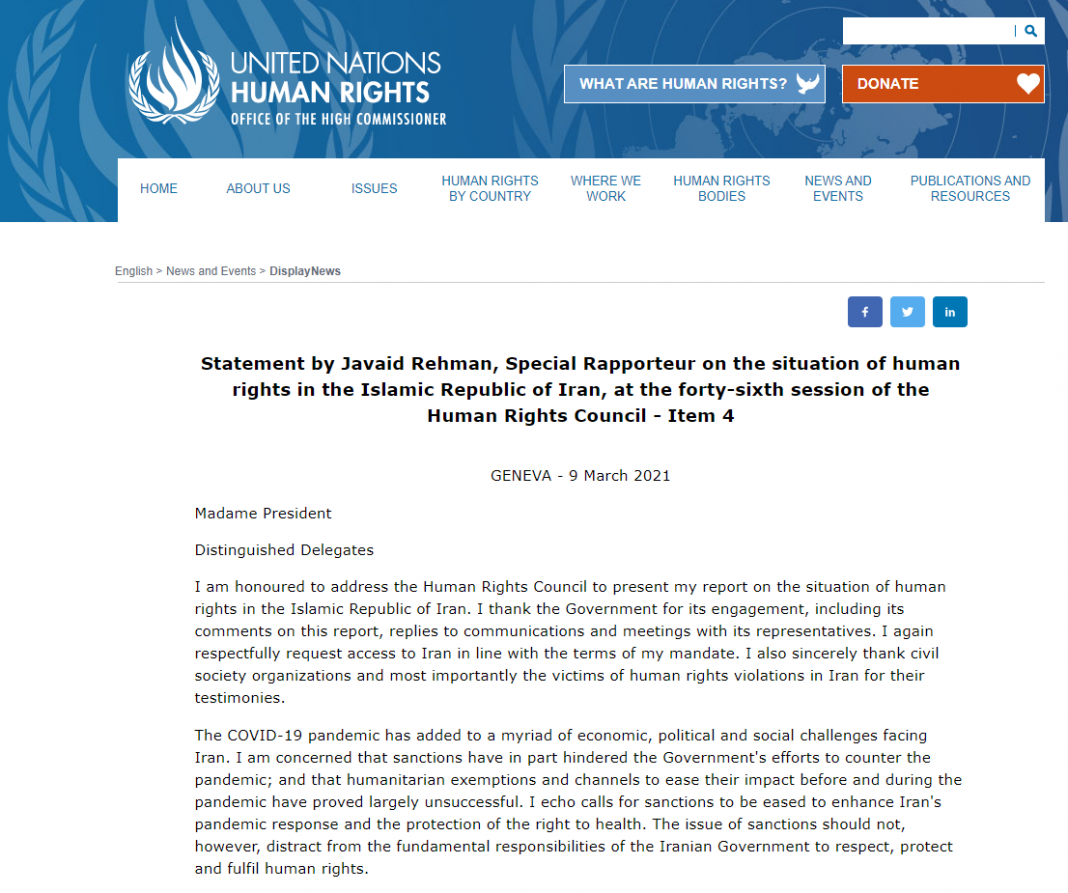 I am honoured to address the Human Rights Council to present my report on the situation of human rights in the Islamic Republic of Iran. I thank the Government for its engagement, including its comments on this report, replies to communications and meetings with its representatives. I again respectfully request access to Iran in line with the terms of my mandate. I also sincerely thank civil society organizations and most importantly the victims of human rights violations in Iran for their testimonies.

The COVID-19 pandemic has added to a myriad of economic, political and social challenges facing Iran. I am concerned that sanctions have in part hindered the Government’s efforts to counter the pandemic; and that humanitarian exemptions and channels to ease their impact before and during the pandemic have proved largely unsuccessful. I echo calls for sanctions to be eased to enhance Iran’s pandemic response and the protection of the right to health. The issue of sanctions should not, however, distract from the fundamental responsibilities of the Iranian Government to respect, protect and fulfil human rights.

The government’s inadequate and opaque response to the pandemic has exacerbated its impact, resulting in over 60,000 deaths as of 1 March 2021 according to Government figures. More than 300 health professionals are amongst the deceased, with others reportedly continuing to work with limited protective equipment. While I commended the prison furlough scheme, I remain highly concerned that arbitrarily detained individuals, including human rights defenders, lawyers and labour rights activists, remain incarcerated notwithstanding serious risks of contracting the virus. They should be released immediately.

Outside of the pandemic, this report outlines the bleak reality of the human rights situation in Iran, characterized by the most egregious violations and continued impunity. It is beyond belief that almost 18 months since the deadly crackdown against the November 2019 protests in Iran, the Government has still not conducted a proper investigation nor held anyone accountable for the lethal force used against protestors, which caused at least 304 deaths. Families seeking justice for relatives killed have been threatened by State agents, with similar intimidation experienced by the victims of Flight PS752, another tragedy not properly investigated. The lack of political will to conduct an independent and transparent investigation into these incidents perpetuates impunity and aggravates the violations. I urge the international community to call for accountability.

Iran’s high death penalty rate continues to be troubling. In 2020, at least 267 executions took place, including at least four child offenders. As of 1 March, over 40 individuals have reportedly been executed in 2021 so far. These figures include a disturbingly high proportion of prisoners from the Baloch minority in recent months. I am especially alarmed that the death penalty is applied for acts that should not be considered crimes, let alone amounting to most serious crimes.

Navid Afkari’s secret execution is emblematic of reports of the death penalty being applied against individuals who participated in protests, and of executions conducted following unfair trials and the use of torture-induced confessions as evidence. The tragic death of the Gonabadi dervish follower Behnam Mahjoubi following ill-treatment in prison is emblematic of the denial of medical treatment to prisoners, an issue that is also highlighted in the report. Ruhollah Zam’s execution for exercising his right to freedom of expression is also emblematic of renewed attempts by the State to silence dissent by extreme means. I urge Iran to establish a moratorium on the death penalty as a first step towards its abolition.

The continued arbitrary detention of human rights defenders and lawyers persists, including a trend of applying new charges to prolong detention, as with Atena Daemi and Golrokh Iraee, and reprisals against relatives, as in the cases of Nasrin Sotoudeh and Soheil Arabi. Unacceptable restrictions on freedom of expression continue, including the imprisonment of journalists for critical reporting, and threats against domestic and overseas-based journalists and their families.

The continued arbitrary detention of dual and foreign nationals is also deeply concerning. I am particularly alarmed that Iranian-Swedish academic Ahmadreza Djalali remains at imminent risk of execution. He should be immediately released from prison and his sentence quashed. I make the same call for other arbitrarily detained dual and foreign nationals, including Kamran Ghaderi, Morad Tahbaz and Massud Mossaheb. I note Nazanin Zaghari-Ratcliffe’s release on Sunday at the end of her sentence, but am deeply concerned that she has been called to court to face new charges.

I am alarmed at the targeting of minorities, including through executions, enforced disappearances and arbitrary sentencing of individuals from the Baluch, Kurdish and Ahwazi Arab minorities. The arrest of over 100 Kurdish individuals, many involved in peaceful activism, is of great concern. I am alarmed at the killing on 22 February of at least ten Baluch individuals by the Islamic Revolutionary Guards Corps, and the internet shutdown imposed across Sistan-and-Baluchistan province to limit access to information about the event. I am also disturbed at the harassment, arbitrary arrests and imprisonments of religious minorities, particularly members of the Baha’i faith who have experienced a new wave of house raids and land confiscations in recent months. I also outline in this report the wide-spread discrimination against sexual minorities in Iran, including hate speech from public officials and most disturbingly the application of the death penalty for consensual same-sex relations. I am troubled that so-called “reparative” therapies are imposed on members of the LGBT community, especially reports of administration of electric shocks, hormones and strong psychoactive medications for children experiencing gender nonconformity and same-sex attraction. I urge the authorities to eliminate all forms of discrimination against all minorities and to ensure the equal rights, respect and dignity of all individuals.

This report provides a primary focus on the human rights situation of women and girls in Iran. While some positive steps – such as in education and in citizenship rights – are recognized, egregious gender-based discrimination persists in law, practice and societal attitudes, disempowering women and girls from participating and contributing in society.

I ask the Government to take immediate action to end child marriages. It is unacceptable that Iranian law sets the marriage age for girls as low as 13, and allows girls even younger to marry with paternal and judicial consent. Official statistics registered over 16,000 marriages involving girls aged 10-14 between March and September 2020. This cannot continue. The Government must raise the marriage age in line with its commitments under the Convention on the Rights of the Child.

Substantial gender discrimination exists within other areas of family law. Permission from fathers or husbands is required for a range of actions that should be the woman’s own choice. Husbands have an incontestable right to divorce whereas wives can only apply to court to end their marriage on limited grounds. I urge the State to take immediate steps to end gender discrimination in legislation.

Violence against women is a serious concern that the Iranian authorities must do more to address. I acknowledge the bill for the protection, dignity and security of women before Parliament, and note it contains some improvements, but stress that there are also many deficiencies that must be addressed for it to provide comprehensive protection. I also ask the State to repeal all legislation which exonerates or mitigates so called honour killings and violence against women.

I close by expressing my alarm at the continued harassment, arrest and imprisonment of Iranian women’s rights advocates, including those campaigning against compulsory veiling laws. Many remain arbitrarily imprisoned under national security laws for defending women’s rights, including Yasaman Aryani, Monireh Arabshahi and Mojgan Keshavarz, who peacefully protested inequality on International Women’s Day 2019. I urge the Government to immediately release all women and men arbitrarily detained for standing up for women’s rights, as well as to immediately introduce fundamental reforms to ensure gender equality under the law and end to discrimination against women in society. Thank you.

Iran: Ebrahim Raisi must be investigated for crimes against humanity

H.Res.118 – Expressing support for the Iranian people’s desire for a democratic, secular, and nonnuclear Republic of Iran and condemning violations of human rights...