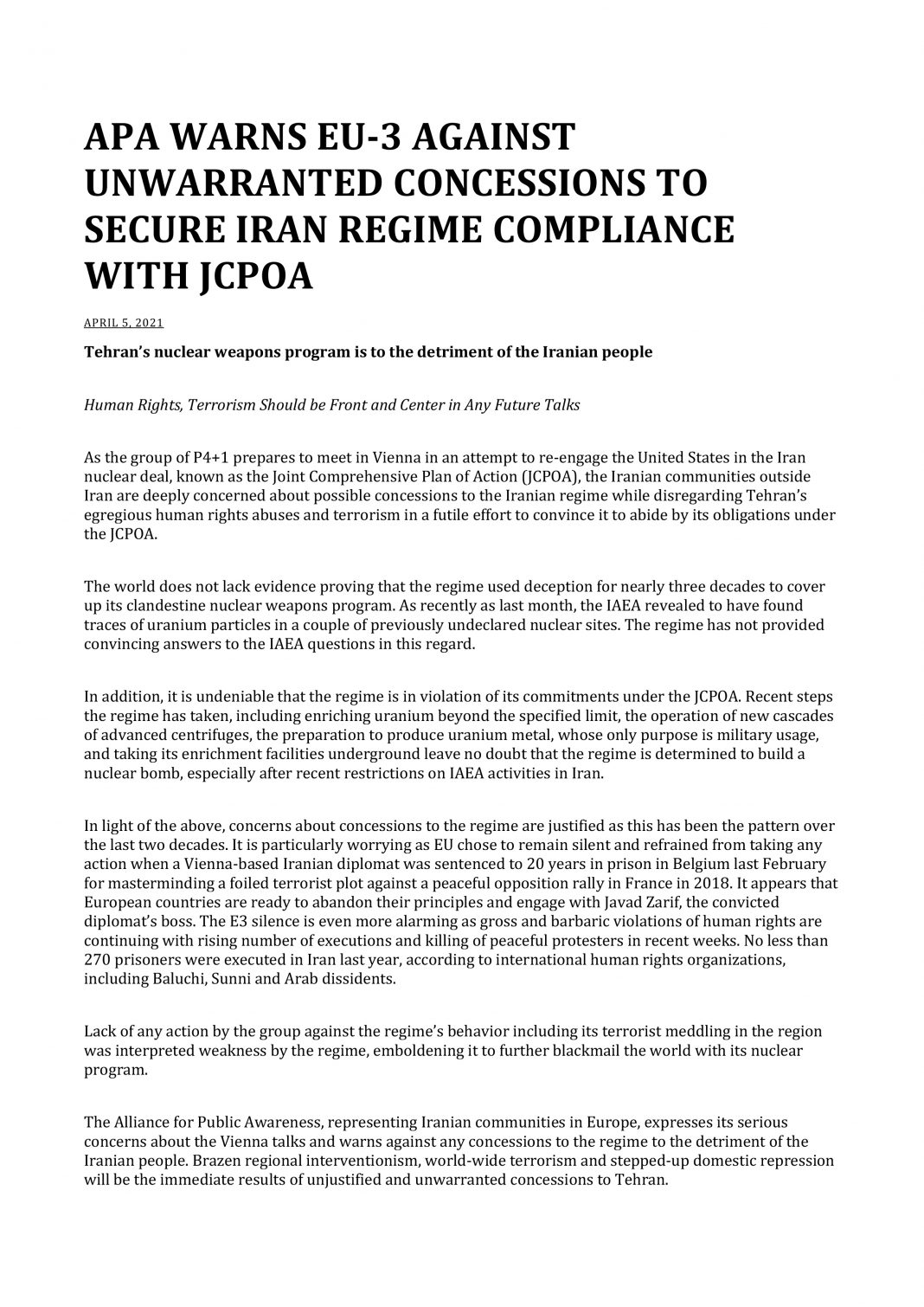 Human Rights, Terrorism Should be Front and Center in Any Future Talks

As the group of P4+1 prepares to meet in Vienna in an attempt to re-engage the United States in the Iran nuclear deal, known as the Joint Comprehensive Plan of Action (JCPOA), the Iranian communities outside Iran are deeply concerned about possible concessions to the Iranian regime while disregarding Tehran’s egregious human rights abuses and terrorism in a futile effort to convince it to abide by its obligations under the JCPOA.

The world does not lack evidence proving that the regime used deception for nearly three decades to cover up its clandestine nuclear weapons program. As recently as last month, the IAEA revealed to have found traces of uranium particles in a couple of previously undeclared nuclear sites. The regime has not provided convincing answers to the IAEA questions in this regard.

In addition, it is undeniable that the regime is in violation of its commitments under the JCPOA. Recent steps the regime has taken, including enriching uranium beyond the specified limit, the operation of new cascades of advanced centrifuges, the preparation to produce uranium metal, whose only purpose is military usage, and taking its enrichment facilities underground leave no doubt that the regime is determined to build a nuclear bomb, especially after recent restrictions on IAEA activities in Iran.

In light of the above, concerns about concessions to the regime are justified as this has been the pattern over the last two decades. It is particularly worrying as EU chose to remain silent and refrained from taking any action when a Vienna-based Iranian diplomat was sentenced to 20 years in prison in Belgium last February for masterminding a foiled terrorist plot against a peaceful opposition rally in France in 2018. It appears that European countries are ready to abandon their principles and engage with Javad Zarif, the convicted diplomat’s boss. The E3 silence is even more alarming as gross and barbaric violations of human rights are continuing with rising number of executions and killing of peaceful protesters in recent weeks. No less than 270 prisoners were executed in Iran last year, according to international human rights organizations, including Baluchi, Sunni and Arab dissidents.

Lack of any action by the group against the regime’s behavior including its terrorist meddling in the region was interpreted weakness by the regime, emboldening it to further blackmail the world with its nuclear program.

The Alliance for Public Awareness, representing Iranian communities in Europe, expresses its serious concerns about the Vienna talks and warns against any concessions to the regime to the detriment of the Iranian people. Brazen regional interventionism, world-wide terrorism and stepped-up domestic repression will be the immediate results of unjustified and unwarranted concessions to Tehran.