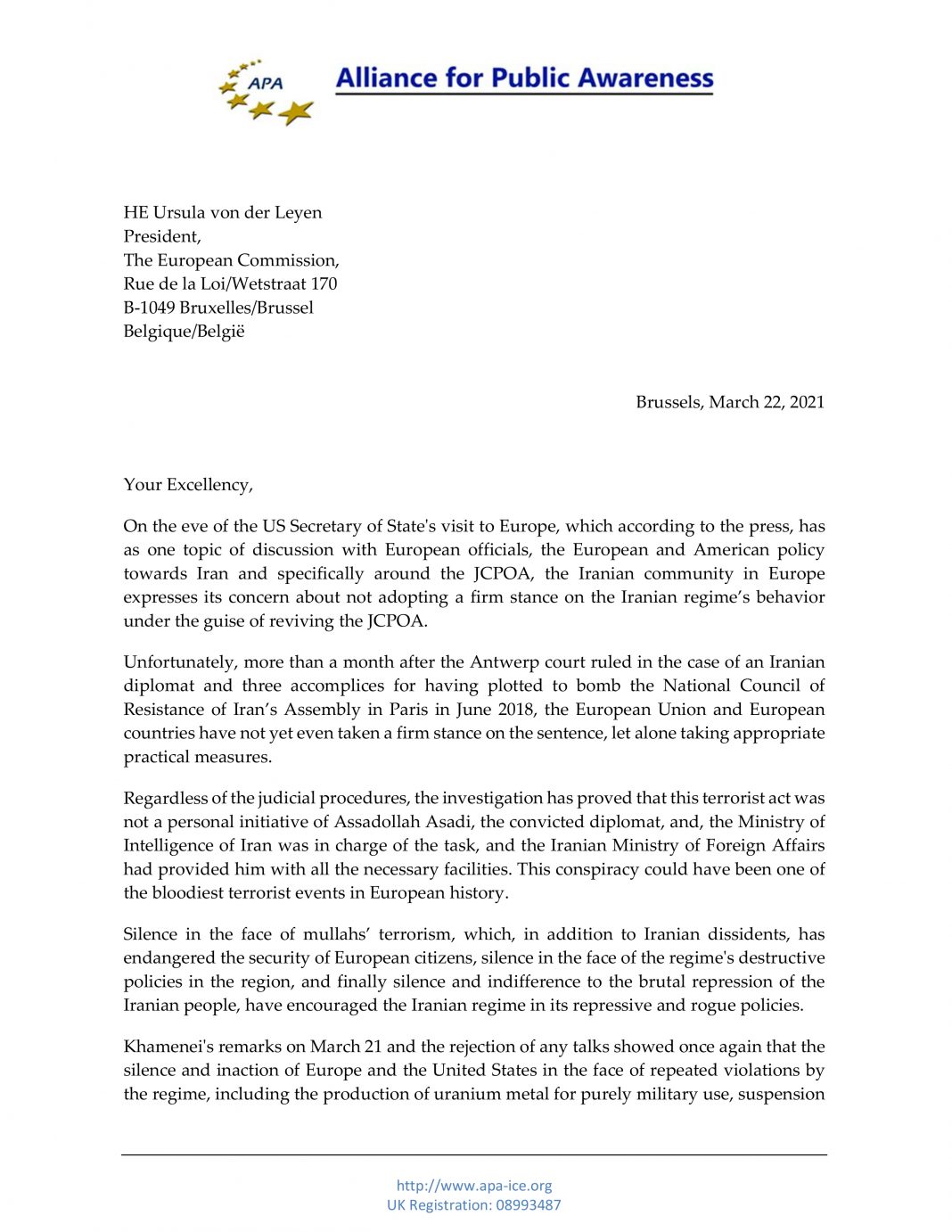 On the eve of the US Secretary of Stateʹs visit to Europe, which according to the press, has as one topic of discussion with European officials, the European and American policy towards Iran and specifically around the JCPOA, the Iranian community in Europe expresses its concern about not adopting a firm stance on the Iranian regime’s behavior under the guise of reviving the JCPOA.

Unfortunately, more than a month after the Antwerp court ruled in the case of an Iranian diplomat and three accomplices for having plotted to bomb the National Council of Resistance of Iran’s Assembly in Paris in June 2018, the European Union and European countries have not yet even taken a firm stance on the sentence, let alone taking appropriate practical measures.

Regardless of the judicial procedures, the investigation has proved that this terrorist act was not a personal initiative of Assadollah Asadi, the convicted diplomat, and, the Ministry of Intelligence of Iran was in charge of the task, and the Iranian Ministry of Foreign Affairs had provided him with all the necessary facilities. This conspiracy could have been one of the bloodiest terrorist events in European history.

Khameneiʹs remarks on March 21 and the rejection of any talks showed once again that the silence and inaction of Europe and the United States in the face of repeated violations by the regime, including the production of uranium metal for purely military use, suspension

of adherence to NPT’s Additional Protocol and hampering IAEA’s inspectors’ mission, has had the opposite effect.

It is too naive to assume that giving concessions or ignoring regime violations will change its behavior. Previous concessions have led to more repression of the Iranian people and terrorism in Europe using diplomatic means. The only way is to be decisive against the blackmail policy of the Iranian regime. The mullahs retreat when they see determination.

We call on you to hold the Mullahsʹ regime accountable for its state‐sponsored terrorism, widespread human rights abuses, ballistic missiles program, as well as attempts to acquire nuclear weapons. Make any agreement subject to the mullahsʹ regimeʹs binding commitment to end its terrorist endeavors in Europe. Otherwise, we expect Europe to cut ties with the regime and close its embassies, which are espionage and terror centers.

We also call on the European governments, particularly Germany, France, and Belgium, to publish, without the slightest consideration, all content, documents, names, and addresses obtained from Assadollah Asadi, which indicate a widespread spy and terrorist network in Europe. To expose the mullahsʹ terrorism in Europe, we expect no document to be classified as confidential and top secret.