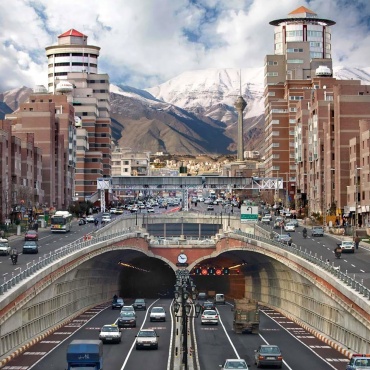 Tehran, the capital and largest city, serves as the cultural, commercial, and industrial center of the nation. Iran hosts

Iran is a founding member of the UN, NAM, OIC and OPEC.

The Persian Constitutional Revolution of 1906 established the nation’s first parliament, which was supposed to operate within a constitutional monarchy. However, a true constitutional monarch was never put into practice.  In 1925 following the ousting of Ahmad Shah, a new Pahlavi Dynasty was established by Reza Khan. He continued to disregard the principle of Constitutional monarchy and ruled by suppression. Following his support for Hitler, he was forced to abdicate power in 1941 by the Anglo-Soviet invasion of Iran. Subsequently, his son Mohammad Reza, replace him by the occupying power. In the beginning the new shah was weak and fragile, but following a coup d’état instigated by the UK and the US in 1953, Shah gained more strength through suppression Iran became even more autocratic. In particular, during this period the secret service, SAVAK, became very infamous for its use of torture in prison and brutality in suppressing the opposition.  Growing dissent against foreign influence and political repression culminated in the Iranian Revolution, which aimed to establish a democratic system. However, due to many years of suppression, all democratic forces in Iran such as the People’s Mojahedin Organisation (PMOI) of Iran had been destroyed, many opposition figures such as the founders of the PMOI had been executed or imprisoned. In addition there was no democratic institution. Thus, the fundamentalists, led by Ayatollah Khomeini used the untouched network of the mullahs and high jacked the leadership of the revolution and established a theocratic system.

However, since then the country has been engulfed in constant crisis, both domestically and also internationally. Domestically, the Islamic Republic is known as one of the most violator of human rights in the world. UN General Assembly or Human Rights body have passed some 60 resolutions condemning human rights violations in Iran. There is also concern about Iran’s support for international terrorism and efforts to acquire nuclear weapons.